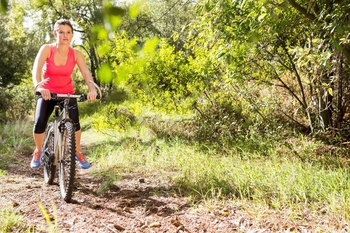 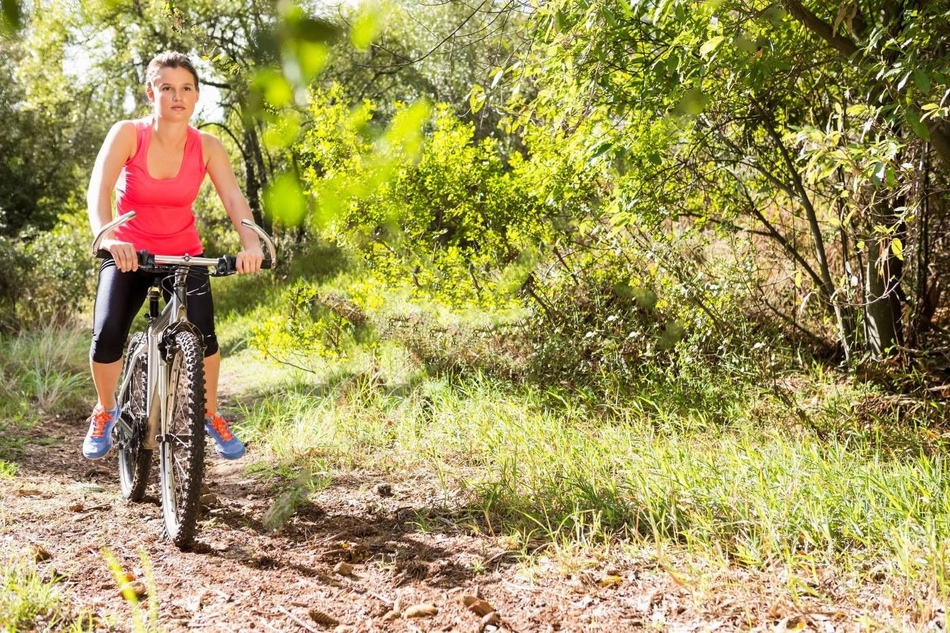 These are the results of my research for the best 29er mountain bikes. I found some under 500, 1000, and under 2000 dollars. Plus the best 29ers which are hardtail and full suspension. 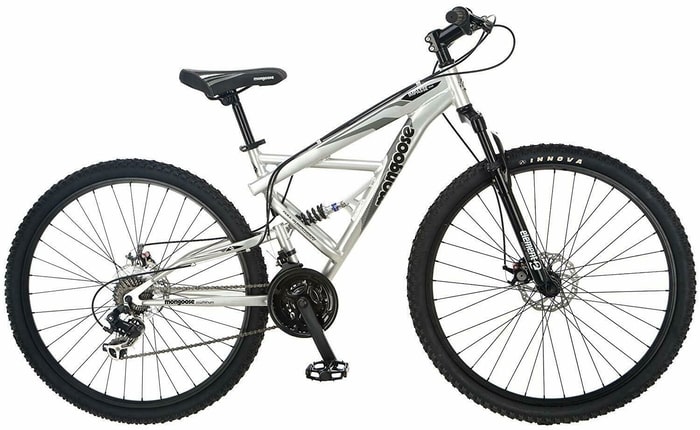 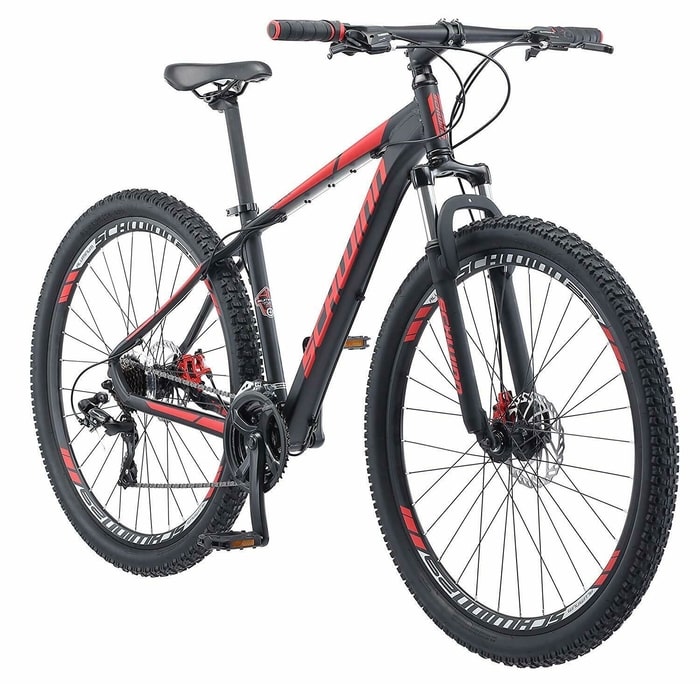 The Schwinn Bonafide 29er is great for riders who want to rider on rougher trails. Even though the wheels are 29 inches they are also 2.25 inches wide. This extra width plus the fact that they also have knobs on them gives you maximum traction for all types of rough trails and terrain.

The first rider I found who rode the Bonafide said after he rode it the first time he only needed to adjust the front derailleur. After that it rode great. Right out of the box the rear derailleur shifted perfectly.

The second rider thought the bike seemed small at first. That was until he put the tires on the bike. The front and rear disc brakes worked fantastic for him. He will never use those older style brakes again. He explained shifting is fast and accurate because of the EZ fire trigger.

The third rider said it took him about an hour to put together the bike without using instructions. After he adjusted the brakes they stopped the mountain bike very smoothly without any feeling or jerking or jarring. The thumb shifters are comfortable and worked well to shift gears.

This 29er is heavier than other 29 inch bikes because of its steel frame. It weighs 47 pounds. A steel frame is hard and durable so it will be able to handle the roughest of trails.

Some riders worry that their chain might slip or get stuck when shifting. Fortunately the Bonafide has a SRAM 3.0 derailleur which helps to prevent any chain slippage or chain dropping. You have 24 gears from which to choose from. Its speed trigger shifter allows you to go up and down the gears with ease.

The 29 inch wheels are supported with full suspension shocks. This will help to protect you and the bike from serious impact such as from roots, rocks, and small logs. This will give you a smoother ride. There is no suspension lock out on this bike but you can use the lever to adjust the suspension.

Many riders like this bike as a good beginner bike because it has 29 inch wheels. It makes them feel secure when they are on uneven roads. The travel of this bike is 120mm which is a medium amount of travel. The fork will compress for you in order to cushion any impact.
For a mountain bike which is under $500 you are getting more than your money’s worth. 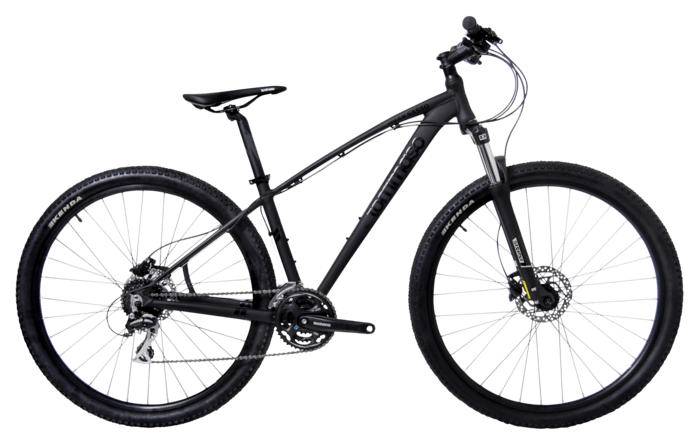 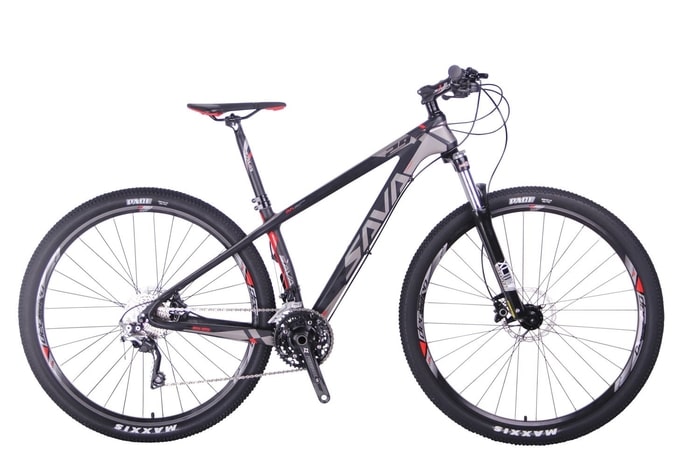 The Savadeck Deck300 is the perfect lightweight 29er mountain bike because of its Toray T800 carbon fiber frame. Believe it or not this frame was designed in a wind tunnel. After much testing the frame, seat post, stays, and seat tube have been contoured in order to fully maximize aerodynamics. To give riders the best bike handling, the head tube has been tapered to strengthen the torsion rigidity.

One rider who rode this Savadeck said the bike looks very sleek. It is light and the gears shift smoothly. He was able to put the bike together himself easily. He did have the bike tuned by his local bike shop.

What he did not like was the clicking sound the bike made when the bike was coasting. But he found out later that, that was normal for the bike in the beginning. Later that sound will go away.

The second rider explained that this 29er has a very cool frame design. He thought, once the bike was out of the bike that the bike looked bulky, but after assembly it looks like a real mountain killer. The Savadeck fits his personality and riding style which is aggressive, strong, and tough.

The third rider described the bike as comfortable and pretty light. He has found he can ride this bike 25% faster with less effort when compared to his last bike.

This bike weighs around 37 pounds and can handle a 300 pound rider. I found a 230 pound rider who has ridden it on dirt trails and rode it roughly. The Savadeck handled it no problem.

The bike frame has pre drilled holes in it so the rider can attach a water bottle. This is much more convenient than having to carry a water bottle in your backpack.

The front wheel of this 29er is equipped with SR Suntour front suspension. This will enable you to take this mountain bike over rocks, roots, and rough terrain. Front suspension is especially good when going downhill to cushion the bike and the rider from impacts.

This carbon frame 29er has 30 speeds from which to choose. These Shimano gear shifters really enable you to be very precise when choosing gears. No matter what the incline or decline is there is a precise gear for that level.

If your goal is speed, then this bike has the right 29 inch wheels for the job. The Savadeck Deck300 has Michelin Country Race mountain bike tires. They are anti gill, difficult to wear, and has low rolling resistance for extra speed. 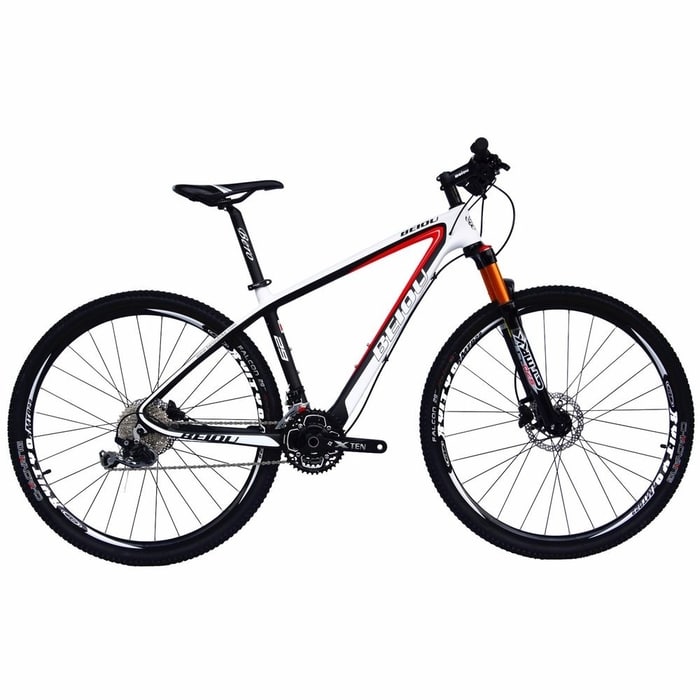 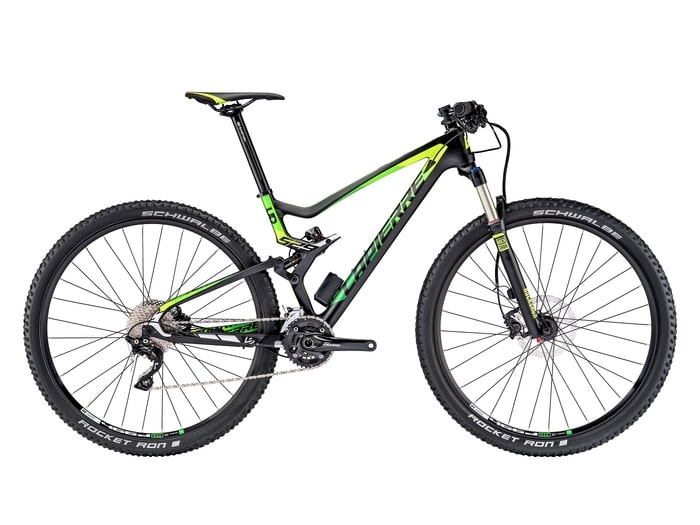 The La Pierre XR5 29er mountain bike is great for riding cross country trails and for riding longer periods of time on hard terrain. This is possible due to its higher end suspension kinematics. This bike is very stable when going downhill and has good bike handling capabilities.

This is due to its longer chainstays and wheelbase. On narrower singletrack trails you’ll need to be more aggressive because of its added length.

The La Pierre weighs around 26 pounds so it makes for a good cross country racing bike if you like to go fast. Its 29 inch wheels will be especially helpful for maintaining your speed with the least effort.

Because this bike is slightly heavier than some other carbon frame bikes, going downhill will be more secure. The added weight will prevent you from bouncing around on the trails. It will also help you to hold your lines better on roots, rocks, and while going over other small obstacles.

What is cool about this bike is you can tell this is a La Pierre bike from a distance. This is true because it has a unique swooping mainframe. This frame is a one of a kind for La Pierre.

It also has twin ribs that run in an under/over configuration going around the rear shock. All of this gives this bike its unique frame design which makes it stand out from afar as well as close up on the trails.

This bike is more suitable for longer rides because its OST+suspension has a Horst link pivot at the chainstay. Plus it has a counter rotating upper linkage which makes it a combination FSR and VPP system. Its 100mm of travel gives you a comfortable smooth ride.

The front of the bike matches the back of the bike for a balanced ride. The front has a RockShox Reba RL fork with 100mm of travel. You can lockout the suspension remotely from the handlebars. This will give excellent control when going uphills.

The 29er wheels the La Pierre has have Formula hubs and Mavic rims. These wheels rotate smoothly and help to keep your momentum going while climbing hills. You’ll also roll over small obstacles more easily because 29 inch wheels will make contact with obstacles lower down on the wheel.

Supporting your speed is Shimano’s 11 speed drivetrain. There are not as many gears to use to shift to, but this keeps things simple. 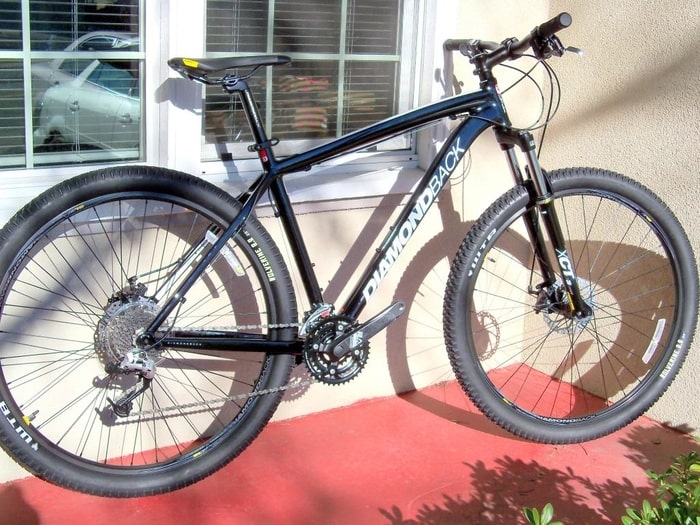 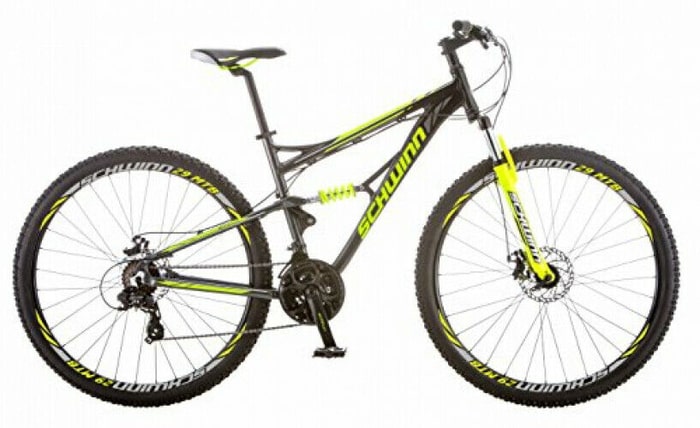 The Schwinn Traxion is a good full suspension 29er mountain bike. It is equipped with an aluminum dual suspension frame. Plus a Schwinn suspension fork. Together they provide you with a comfortable and smooth ride on the trails by absorbing the impact of small obstacles like rocks, roots, and any other bumps.

The first rider I talked to said this bike really cushions the bumps and is very smooth. He rides on rough dirt and rocky mountain rocks. It shifts gears very fast going up and down the gears. He found the disc brakes work well to slow down his 185 pound body. He put the bike together easily. All he had to do was some minor tuning and replace the saddle.

The second rider explained that the set up of the rear derailleurs was simple. The packaging was good and he assembled the bike easily. He said the 29 inch tires were very helpful on the trails when riding over tree branches and rocks compared to when he was a BMX rider. The 24 speeds of the bike enabled him to find the right gear easily.

The third rider liked the full suspension a lot. He said at first it feels like your tires are low on air when you first ride it. But then when you go on rough terrain you realize the tires are just fine. It is the suspension that makes it seem like the tires are low. He assembled the bike himself easily. He highly recommends having the local bike shop tune up the bike. He noticed a big improvement.

The Schwinn Traxion is equipped with Shimano EZ-Fire trigger shifters. You have 24 speeds from which to choose the right gear for the type of incline or decline you are on. There are Shimano derailleurs on the front and the rear which make shifting gears fast, easy and smooth. So accelerating will be quick and reliable.

To slow down when you need to there are front and rear mechanical disc brakes. This gives you the ability to stop smoothly and gradually without any jerking or jarring movements. Plus mechanical brakes for many are easier to maintain than hydraulic brakes. You don’t have to bleed the brakes, just clean or replace the cables.

The rims of the Schwinn Traxion are extra wide double wall alloy rims. Alloy rims like these are lightweight yet strong and durable. These types of rims are perfect for 29 inch wheels in order to handle any bumpy trails or terrain. Double wall alloy rims and the knobby tires of this bike are the perfect combination. 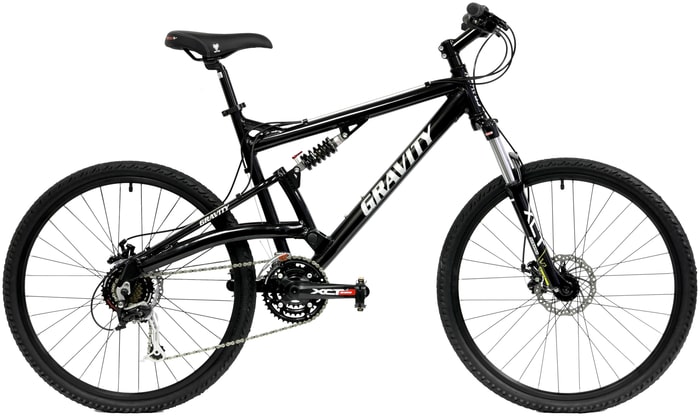